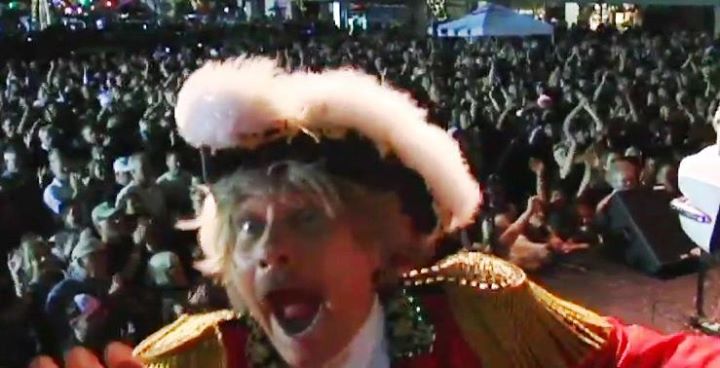 Very sad news in the rock ‘n’ roll universe with the passing of our friend Paul Revere.

My friend Phil “Fang” Volk sent me this sad news on Saturday night:

Very sad news…Paul Revere passed away today at 2:45pm surrounded by his wife and a few close relatives and friends. He died peacefully at his cabin in Idaho. He finally lost his battle with cancer. He was 76. I thought you should know… It’s a very sad day for the Raider legacy…. my heart is broken….He was a dear friend of mine……. He was a good man with a great big heart, and he dedicated his life to his band for the past five decades… He will truly be missed in the rock & roll world, and by his friends who loved him as I did… He was an original, “the genuine article” – one of a kind – and his accomplishments need to be touted and celebrated. Thank you for anything you are able to do to give him honor at this time of sorrow and loss…

Last night, the Oregon Music Hall of Fame was in the middle of celebrating other Oregon musicians when they received the word about Paul.

The Oregon Music Hall of Fame has a tradition of ending its induction ceremony with “Louie Louie,” as the night’s performers, presenters and organizers take the stage for a final hurrah. But there was a shock before the song on Saturday night.

As Currier explained, two bands recorded “Louie Louie” in Portland in 1963. One — the Kingsmen — had a hit. Paul Revere and the Raiders would have a career. Born Jan. 7, 1938, Revere began the band that would become the Raiders (with Oregon native Mark Lindsay as the singer) 20 years later and never looked back.

This news really hits hard at the Louie Report. Paul Revere was a friend of the documentary project, who provided some wonderful stories that we were so very fortunate to capture on video.

He was often nicknamed the “Last Madman of Rock & Roll,” but for Columbia Records, the world’s largest record company in the early 1960s, Paul Revere & the Raiders were the very first rock band signed to this prestigious label, which was not an easy task, considering the resentment the industry had towards this type of music at that point in time. 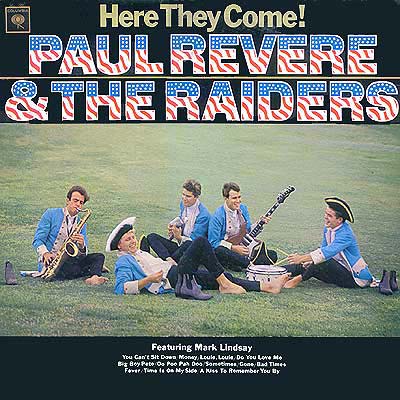 The first record released on Columbia was a 45 single of “LOUIE LOUIE,” which was recorded at the very same studio (Northwestern Inc.-recording studio owned and operated by Robert Lindahl) where the Kingsmen recorded their version of the song. The Kingsmen recorded it on April 6th, 1963, and Paul Revere & Raiders probably did theirs on April 13 – almost a week later.

While the Kingsmen had the hit recording of the song, Revere & Raiders forged ahead with a more successful career, often marketed as “America’s Answer to the Beatles” when Beatlemania hit the States. With regular appearances on national television shows, including Dick Clark’s Where the Action Is, Happening ’68, and It’s Happening, they became extremely popular, selling millions of records, packing kids into auditoriums to see their power-packed performances!

A few years ago, when Raiders guitarist Drake Levin passed away in San Francisco, Paul Revere flew out to attend his memorial, and I was honored to be asked to shoot video of this event. Paul shared some great stories, and here’s one of the moments I posted on YouTube…

As the news broke out, a handful of my friends shared some wonderful memories of the man on Facebook…

“Heavy heart today…The most difficult message I’ve had to post tonight for Paul. Since I can remember I’ve known the man, Paul Revere. My earliest memories were as a little kid in hotel rooms and views from behind a stage, to a teen working his merch, and now an adult working with him. Between Paul and my Father I’ve learned so much about the world of music, most of all how to be a class act. I loved to listen to Dad and Revere tell stories. I wish all could hear these. I am honored to be part of the Revere family, and The Raider history. I’m so glad we spent time this week with Paul.
Thank you, Paul! Love to Sydney and Jamie.” – Alex Hart, member of Raiders family

“The first time I saw Paul Revere & The Raiders, they were opening for The Rolling Stones at the Civic Auditorium in SF and they tore the house down! Such Great Entertainers! This is a sad day.” – Roy Loney, founding member of the Flamin’ Groovies

“To hear of Paul Revere’s passing really saddens me. The first time I ever saw Paul Revere & The Raiders, was sometime in the Spring of 1965. I was driving my girlfriend back to EMU in Ypsilanti, Michigan. It was a warm day and through our open car windows we could hear music, as we passed a new shopping center. So, we pulled into the parking lots to see what going on. There was a band playing in that lot on the back of a flatbed truck. Low and behold it turned out be Paul Revere & The Raiders!!! The first Columbia album had just came out and their they were playing for the opening of a shopping center in a small Michigan college town. This was – what I think of the classic line-up of with Smitty & Fang. Needless to say, they blew us away – ha!!!” – Denis Loren, poster artist

“I had the pleasure of doing a backstage interview with Paul three decades ago in San Jose at the Saddlerack. Despite a power outage he was a very nice and wacky guy. I’m glad he was able to keep rocking until the very end. His showmanship and talent set the bar for a lot of reasons. The music will live on, and Mr. Paul Revere will be missed. He gotta go now….” – Jeff Stretch Riedle, founder/archivist of KFJC Maximum LOUIE LOUIE marathon

I was also reminded of a very cool comic strip – “Big Nate” by Lincoln Peirce, which provided a great tribute to Paul Revere a few years ago. 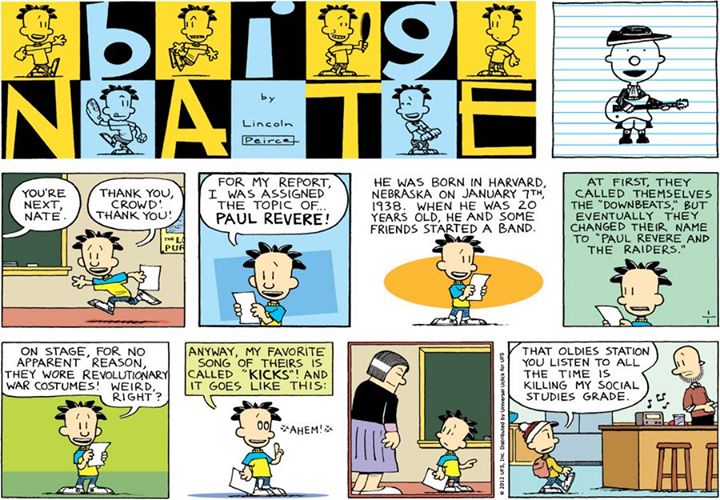 One of my favorite possessions is a wonderful photo book on the history of music in the Pacific Northwest that I was able to talk Paul into autographing. On the cover of this book assembled by Peter Blecha, there’s a magnificent photo of Revere & Raiders taken by Gino Rossi. The band is playing to a packed house with kids packed in like sardines, witnessing an amazing moment on stage. Paul not only autographed this book, but he also drew a nice self portrait of himself!! 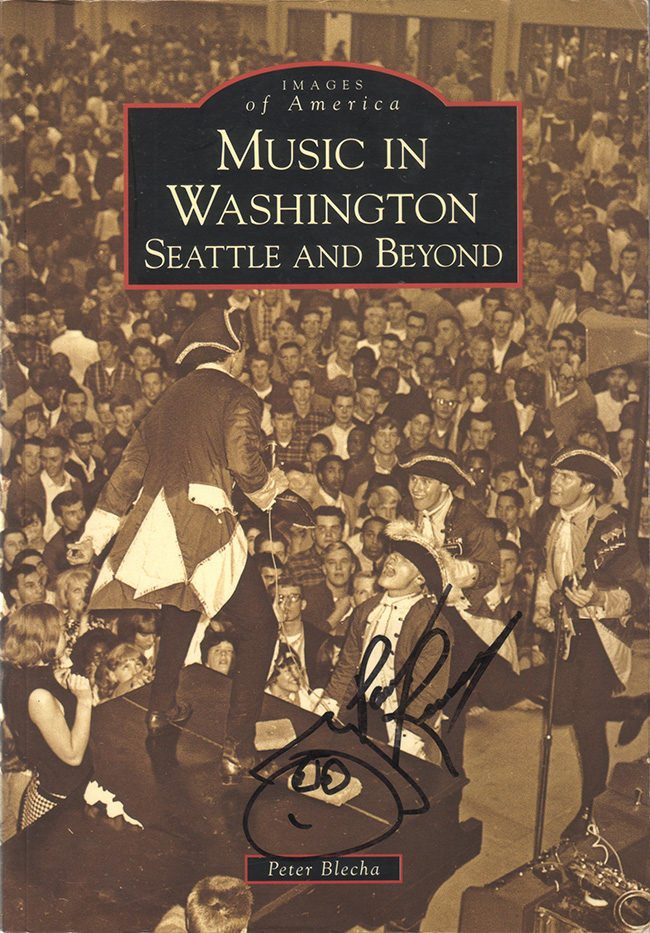 There’s a great send-off for Paul on his official webpage. Please read it – it’s a keeper!!

In the meantime, I leave you with obvious choice for this week’s LOUIE LOUIE – a vintage performance of the song by the man and his band! 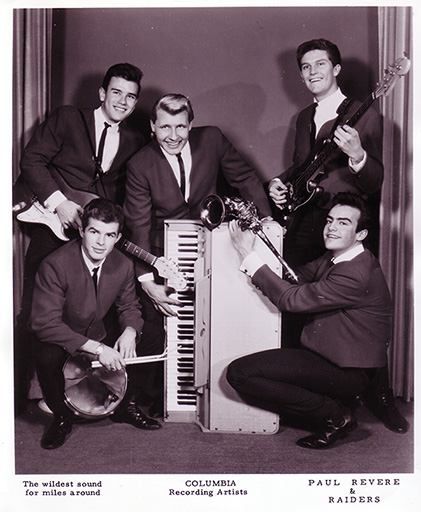