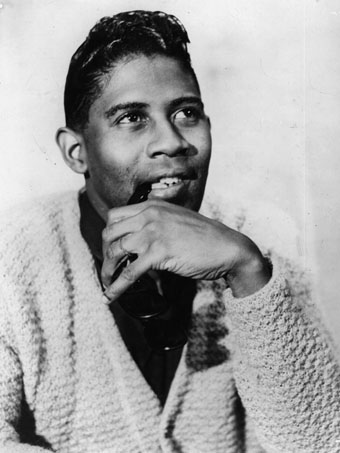 Even if this man never wrote “LOUIE LOUIE,” he should go down in history as one of the true pioneers in American rhythm & blues, as one of the great songwriters, singers, and “musical utility men.”

As a songwriter, he created some great hits for The Kingsmen, Etta James, Louis Prima, The Sonics, and many others.

As a singer, often singing bass and tenor in the same song, he inspired many to emulate his style, including Barry White, who performed an incredible version of “LOUIE LOUIE” on his BEWARE album.

He is listed as one of Frank Zappa‘s inspirations on the ground-breaking FREAK OUT debut album by the Mothers of Invention.

He is one of the great underdogs in the American music story.

He is Richard Berry, and he deserves your attention.

Richard Berry was born on April 11, 1935 in Extension, Louisiana. When he was one year old, he was brought to Los Angeles, where he lived most of his life. As a child, he had an injury to his hips, and used crutches until the age of six, when he had corrective surgery. His first musical venture was the ukulele, which he learned at a summer camp for crippled children.

At Jefferson High School in Los Angeles, California, Richard Berry was a respected member of the local doo-wop music community that included Jesse Belvin, Cornel Gunter, Young Jessie, Curtiss Williams and Gaynel Hodge, among others. One of the first groups he joined was a harmony group known as the Flamingos. Later, Richard joined a group that became known as the Flairs, and was involved with a variety of different musical projects, recording for Dolphin’s of Hollywood (unintentionally- but that’s a story in itself), Modern Records, Flair Records, and Flip Records. He provided the uncredited lead vocal for the original recording of Leiber and Stoller‘s “Riot In Cell Block #9” with the Robins, which later evolved into the Coasters. He also contributed the male counterpart voice for Etta James‘ recording of “Roll With Me, Henry” (a song with its own share of controversial innuendoes), which was written as an answer to Hank Ballard‘s “Work With Me, Annie.”

The original “LOUIE LOUIE” was written in 1955 by Richard Berry and released as a single in April 1957 on Flip Records. Recorded with the Pharaohs, Richard created a catchy, somewhat calypso diddy that was originally released as the B-side for his recording of “You Are My Sunshine.” At the time that Richard Berry released “LOUIE LOUIE,” he was ready to expand his musical horizons from his doo-wop musical roots. As a founding member of the Flairs, he had various degrees of success with his recordings on Modern Records. When he was offered the opportunity to record on Flip Records, he was trying out a new sound, playing with a local Latin rhythm and blues band known as (Rick Rillera &) The Rhythm Rockers. Inspired by certain Latin rhythms, Berry wrote his creation on a napkin backstage between musical sets, and waited a year before recording the song that would eventually become the world’s greatest party song.

In early 1957 before the song was even released, Richard Berry sold the publishing rights to LOUIE LOUIE and three other songs to pay for his wedding to Dorothy Adams in March of that year. Certainly nobody ever imagined that this little song would become embraced by millions as a “universal party song.”

With the help of an organization by the name of Artists Rights Enforcement, Richard Berry was able to recover some of his publishing rights in 1986.

In 1992, “LOUIE LOUIE” was sold to Windswept Pacific, a publishing company based in Beverly Hills, and Richard Berry received a substantial payment.

In 1983, he traveled to KFJC, a college radio station based in Los Altos Hills, California, where a marathon took place to celebrate the massive impact of this song. Titled “Maximum Louie Louie,” this event marked the first time Richard Berry had ever met any member of the Kingsmen, as Jack Ely, the original vocalist, flew down from Oregon for this special occasion. Heavily promoted by a very ambitious all-volunteer staff, this event received significant national and international media attention, lasting for 63 hours, with over 800 unique versions of the song.

Prior to this particular event, Richard Berry was a relative unknown, with very little acknowledgment for his musical legacy. Soon afterwards, he was bombarded with requests for interviews, and was invited to perform at all sorts of venues around the United States, including a “Best of LOUIE LOUIE” event at the Tacoma Dome in December 1983, a few months after the KFJC marathon, featuring the Kingsmen, the Wailers, Little Bill Engelhart, Ron Holden and other Northwest musicians that each had their own special history with this song.

As Richard received more recognition for his music with a worldwide audience anxious to seek out his musical legacy, and became financially successful after many years of struggling in the music biz, he continued to live in his old neighborhood of South Central Los Angeles, as it all felt like home to him. He continued to perform shows around the country, but had cut back considerably after a heart aneurysm and operation in December 1994.

A year before his death, Richard Berry got together with his old band-mates The Pharaohs for a special performance that also featured another one of his back-up bands, The Dreamers. It had been quite a few decades since Richard had last played with the Pharaohs, who had backed him up for the very first recording of LOUIE LOUIE.

The event was a benefit performance for the Doo Wop Society of Southern California, which took place on February 24, 1996 at the Petroleum Club in Long Beach.

This is a photograph of Richard Berry & the Pharaohs, backstage at the Petroleum Club on February 24, 1996. From the left, we have: Eugene Maye, Richard Berry, Robert L. Harris, and Godoy Colbert.

Richard Berry left this world on January 23, 1997. He died in his sleep at his home in Los Angeles.

(This article was originally written and shared in January 1997, and recently updated in September 2022. Previously, I was under the false impression that publishing rights for LOUIE LOUIE were sold after the song had already been released for a few years. The song publishing was sold in early 1957 before the song was released in April 1957.)