A Short History of the song LOUIE LOUIE

(Please understand that this is a SHORT HISTORY of the song. The documentary continues to be produced, and significant individuals continually add to the legend, making this particular article a mere footnote.)

Fact: With the exception of Paul McCartney’s “Yesterday,” it’s been covered more times than any other pop song (over 5,000 versions and counting).

Fact: It was the subject of obscenity investigations by the FBI and the FCC, culminating in an airwave ban in the state of Indiana.

It’s been called everything from a musical joke, pure garbage, the dumbest song ever written, to the quintessential pop single, the first punk record and the missing link between fifties rock n’ roll and sixties hard rock. This is the SHORT history of the song “LOUIE LOUIE.” 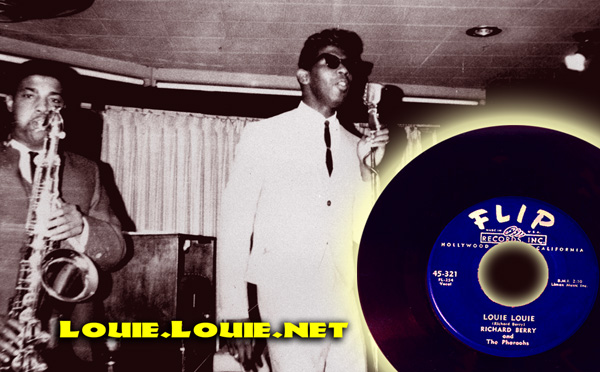 The original “LOUIE LOUIE” was written in 1955 by Richard Berry and released as a single in 1957 on Flip Records. Recorded with The Pharaohs, Richard created a catchy, somewhat calypso diddy that was originally intended as the B-side for his recording of “You Are My Sunshine.” A graduate of Jefferson High School in Los Angeles, California, Richard Berry was a respected member of the local doo-wop music community that included Jesse Belvin, Cornel Gunter, Curtiss Williams and Gaynel Hodge, among others. Before he had ever written the song that many would claim as the ultimate party song, Berry provided the uncredited lead vocal for the original recording of Leiber and Stoller’s “Riot In Cell Block #9” with the Robins, which later evolved into the Coasters. He also contributed the male counterpart voice for Etta James’ recording of “Roll With Me, Henry” (a song with its own share of controversial innuendoes), which was written as an answer to Hank Ballard’s “Work With Me, Annie.”

At the time that Richard Berry released “LOUIE LOUIE,” he was ready to expand his musical horizons from his doo-wop musical roots. As a founding member of the Flairs, he had various degrees of success with his recordings on Modern Records. When he was offered the opportunity to record on Flip Records, he was trying out a new sound, playing with a local rhythm and blues group known as (Rick Rillera &)The Rhythm Rockers. Inspired by certain Latin rhythms, Berry wrote his creation on a napkin backstage between musical sets, and waited a year before recording the song that would eventually become the world’s greatest party song.

Richard Berry actually sold the publishing rights before it was released to the public.

As fate would have it, “LOUIE LOUIE” was adopted by countless American bar bands and became especially popular in the Pacific Northwest region.

As the legend goes, up in Tacoma, Washington, Rockin’ Robin Roberts, a singer with the Wailers, picked up on Richard Berry’s catchy little single, and decided to re-do this song in a whole new manner. Playing around with the song, The Wailers added their own variations, with Rockin’ Robin Roberts belting out the words like an inspired gospel melody and Rich Dangel adding the legendary guitar solo, releasing the first rock ‘n roll (as opposed to rhythm & blues) version of the song. Released on the band’s own Etiquette Records, the song became a regional hit in the Seattle-Tacoma area. Picked up for national distribution by Liberty Records, the song failed to chart on across the country, for reasons not completely known. Nonetheless, The Wailers had a faithful following in the Pacific Northwest area, inspiring The Sonics, The Ventures and Jimi Hendrix, who wrote a song about one of their regular stomping grounds, The Spanish Castle.

With all legends, there’s more to the original story than what’s usually told. “LOUIE LOUIE” was a very popular song in the Northwest, and was considered a regional anthem. According to Kearney Barton, renowned audio engineer, Little Bill & the Blue Notes were actually the first Northwest band to record “LOUIE LOUIE,” but didn’t get around to releasing the record until after the Wailers. Dave Marsh, author of a book on LOUIE LOUIE, stated that Ron Holden of the Playboys was the first person to ever perform “LOUIE LOUIE” in the Pacific Northwest. In my research, I discovered that the Playboys were indeed the first band to cover this song, but Ron Holden was not yet a member of the band. The Frantics and the Dave Lewis Combo were also performing the song before either Rockin’ Robin, The Wailers or Little Bill had discovered it.

In the upcoming documentary, you’ll be able to hear some very interesting and often conflicting stories from the folks that were there. 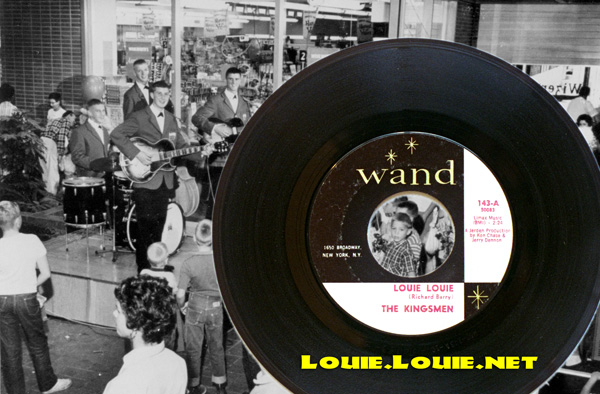 Following the lead of their Northern musical neighbors, the infectious melody drifted into the neighboring Northwest community of Portland, Oregon. Two local bands, The Kingsmen and Paul Revere & the Raiders, discovered the strength of this song, and decided to record it themselves. Recording the song within a week of each other in April 1963 at Bob Lindahl’s recording studio, both bands emerged with recordings that are considered, to this date, as the two most popular prototypes of the song.

Depending on who you listen to, The Kingsmen recorded the song as a demo for a job on a cruise liner, or were coerced into a recording studio by a local disc jockey Ken Chase, who thought he could produce a “monster hit.” Either way, the band originally thought the original recording was pure garbage, and were equally disgusted when they discovered they had to pay the $50 (or $36) recording fee!!

As with many bands, this group of teenagers lost their original line-up when lead singer Jack Ely left the group to concentrate on attending college. When the song became the run-away hit, accelerated by constant airplay in Boston, of all places, Jack Ely tried to talk his old-time childhood pal, Lynn Easton, the leader of the band, into letting him rejoin the band. “Nothing doing,” said Easton, and Ely was never again a part of the Kingsmen. From this point on, things became complicated, as Ely toured around the country as Jack Ely and The Kingsmen, and the Kingsmen performed on television shows , lip-synching to the voice of their former singer. After multiple lawsuits, The Kingsmen faced another battle when the state of Indiana banned radio airplay of the song, and the F.B.I. conducted an extensive investigation of the song, citing potentially obscene lyrics. Harassed by government officials, The Kingsmen used the controversy to their fullest advantage, as kids around America passed around handwritten notes with what they thought were the supposedly filthy lyrics. 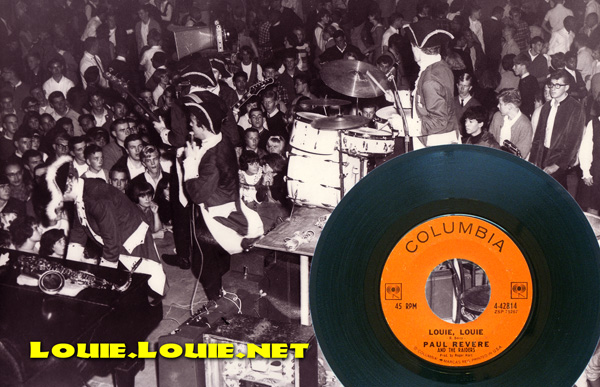 Emerging to the national audience at the same period as The Kingsmen, from the same area, using the same recording studio, Paul Revere & the Raiders had their own version of the song, which was far more popular in their hometown of Portland, and other areas such as San Francisco. This band was a trendsetter in many ways. They were considered the first rock and roll band to ever be signed to Columbia Records, the largest record label in the world at the time. When Wand Scepter Records, a smaller label, had such a major success with The Kingsmen’s version of “LOUIE LOUIE,” it accelerated the promotional drive for Paul Revere & The Raiders, as record company executives realized they could have been the ones to have the hit with the song. Long before glitter rock, theatre rock, punk rock, or MTV, Paul Revere & the Raiders were THE band to see, using their performances as a showcase for their theatrical anarchy, wearing wild outfits, and enacting goofy stunts, such as setting their hair on fire, among other things. With Mark Lindsay as the lead vocalist, they became the first rock and roll band to ever have their own television show, “Where The Action Is,” which lasted for two years on the ABC network.

AND THE STORY GOES ON…..

Like I said, this is the “short history,” more of a teaser than anything else…..

Stay tuned for the complete story!

The photograph of Richard Berry is copyright Richard Berry family archives; the images of The Wailers, Rockin Robin Roberts & Dave Lewis are courtesy of Jeff Miller/ Wiley’s Golden Oldies of Tacoma, WA; the photographs of The Kingsmen and Paul Revere & the Raiders are copyright Gino Rossi; when in doubt, all images & words copyright 1999-2022 Eric Predoehl / OCTALOUIE, LLC / LouieLouie.net except as noted. Bonus points to anyone that noticed some minor changes to these pages, as we shall revise some words as we discover new information about these histories. All rights reserved.