For the past couple of Saturday nights, I’ve had to deal with some rather annoying neighbors that have been throwing some very loud parties with really awful “dance” music. The first time I dealt with these parties was when I came home after being on the road for two days on the road with very little sleep. The last thing I wanted to hear was the monotonous tone of “THOMP THOMP THOMP THOMP THOMP THOMP…..” with some talentless hack spewing some mean-spirited garbage about some “Mo-Fu-in Bitch Hoe, yack, yack, etc….” I got home at on Saturday night at midnite, and I really didn’t want to hear this kind of noise pumping into my bedroom so loud I could hardly even hear myself think!

Now, I’m really not one to criticize certain styles of music, even if I’m no fan of modern rap. I’ve certainly had to deal with my share of opinionated snobs that have expressed their pea-brain-sized criticisms of THE SONG that inspired this very website, but I’ll leave such comments for another entry….

Maybe if these neighbors played Outkast, the Beastie Boys, Grandmaster Flash, Ice T, or some of the “old school” variations of rap, I might have actually enjoyed the musical content, but the bottom line was that this music was simply too loud, and I really wanted to enjoy the pleasures of silence at my own home as I prepared for what I hoped would be a stress-free slumber. I certainly didn’t want into some confrontation with these folks, who aren’t exactly the friendliest neighbors to deal with, so I called some “experts” on this type of problem, and this situation was eventually pacified.

A few days ago, it was the same story all over again. Luckily, I wasn’t completely burnt out from a long assignment, so I decided to find my own damned party that night with better music in the background. I came home about about 4 hours later, and the neighbors were still raging late at 2:00 in the morning. Again, the “experts” were called in, and things settled down to a peaceful semi-silence. 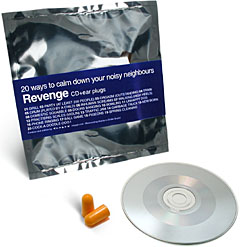 I don’t know what I’m going to do if this type of activity continues, but I found a real interesting product designed to address this type of problem. There’s a CD entitled “Revenge” that features all sorts of annoying sounds designed to drive your neighbors batty- electric drills, screetchy violins, children screaming, an extended orgasm, roosters waking up, and other things like that. This CD even comes with a set of ear plugs! One could put this on a high-powered stereo system, pick one track to loop continously, and then turn up the volume all the way up to 12!

I haven’t ordered one of these CDs yet, but I’m seriously thinking about it….