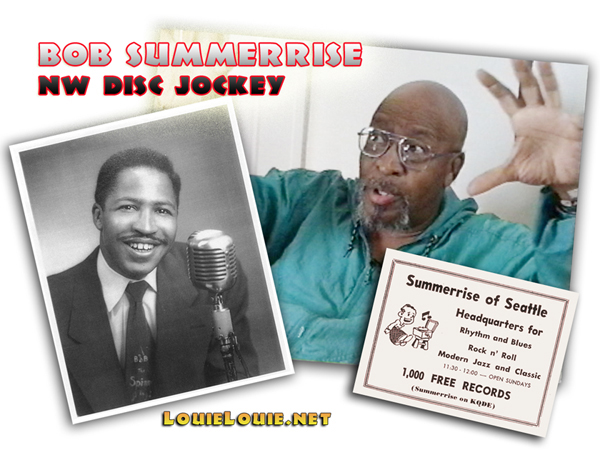 This is actually old news, but I just found out that Bob Summerrise has passed away in 2010.

Bob Summerrise was the highly influential disc jockey and record store owner in Seattle during the 1950’s that exposed a lot of kids to rhythm & blues music, including Richard Berry‘s LOUIE LOUIE.

I’m very fortunate I was able to meet and interview him for the documentary.

Light in the Attic Records shared the news:

Sadly, on November 12th Bob Summerrise Jr. passed away. He was a giant part of the Seattle music scene back in the day, owning an influential record store called Summerrise Records (stocking many of those 45s now heard on LITA’s Wheedle’s Groove Seattle’s Finest in Funk & Soul 1965-75 comp and a big supporter of the local soul scene). He was also a disc jockey on Seattle soul station KYAC. Our thoughts are go out to his family.

On Friday November 12th we lost the patriarch of our family and an icon in the Seattle radio & music scene. Bob Summerrise, affectionately known as “Brother Bob” passed away peacefully at Valley General hospital in Renton. He was born in Chicago on January 26, 1925 of the union of Robert Summerrise Sr. and Gertrude Shields. Brother Bob moved to the Seattle area in the early 40’s where he began a successful career as a broadcaster on numerous radio stations including, but not limited to; KTAC, KQDE, KAYO, KZAM & KYAC. Truly a Northwest pioneer in the field, he was one of the first African-American on-air personalities and the first with an engineering license.

The family requested that in lieu of gifts and flowers, memorials in his name be sent to:

If you’d like to read a great book that featured a great chapter on Bob Summerrise, be sure to check out the book “Jimi Hendrix, Voices From Home,” written by my friend Mary Willix, who introduced me to Bob. It’s an exceptional book about Jimi Hendrix‘s Seattle roots.