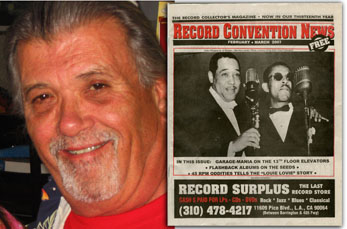 I met Jim Philbrook in the 1980s when he was a single father raising his daughter Raina in Long Beach. He was born in Massachusetts on March 26, 1943, grew up in Avalon on Catalina Island and went to Avalon High School. From there, it was Long Beach.

He was a big blues and R&B fan and was always involved with record shows meets and blues shows – he was always at the great blues shows at the Nugget and Cal State Long Beach, where we saw acts like Etta James, Johnny Otis with Shuggie, Lloyd Glenn, Jimmy McCracklin and other unbelievably great talent at a small beer place generally used for students on campus.

During the 90s, Jim produced a very good record show at the Holiday Inn in Long Beach, but the city close it down for reasons that still escape me. Paranoia against small guys having success, I figure.

Jim lost his job at the harbor because of illness and the union wouldn’t go to bat for him, so he was pretty well screwed. He got a job placing tapes at gas stations throughout California, which meant he had to drive from Long Beach to Santa Rosa twice a month in whatever car he could muster up.

He started Record Convention News on a shoestring and kept it alive and viable all by himself and a handful of writers he could trust. He was always looking for writers to add articles to write about forms of music he didn’t exactly love – hip hop, punk – making him very open minded when it came to all music. His own favorite was Lord Buckley, a passion I didn’t exactly share and could quote his routines and life story, and the hipster scene in general.

He was very opinionated, would spout off about a subject at – great – length at the drop of a viewpoint and could go on with very informed opinions. He was self-educated, well read, very ethical and a good guy to hang out with. He’ll be missed.

Record Convention News was a great publication that I used to pick up for free at record stores whenever I could. I never met Jim, but I knew Steve, who was an associate editor for this paper. Unless some angel decides to step in and continue Jim’s one operation, I have a feeling we’ve seen the last of this publication, unfortunately.

Steve Propes just launched a new blog of his own, called simply “45 RPM.” Coincidentally, one of his very first posts to this blog is the story of his rare “Louie Lovie” 45, which Jim Philbrook played a part in. It’s a little different article from the “Louie Lovie” article I posted a few days ago. Be sure to check out Steve’s blog at: http://rockinsteve.wordpress.com/.

My thoughts go out to the family and friends of Jim Philbrook.