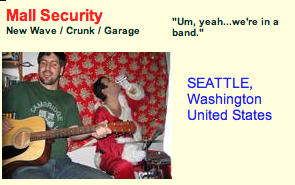 Over at the LOUIE LOUIE PARTY at Yahoo, we are honored to have a new member. Here’s his introduction:

When I was in high school, my garage band Mall Security recorded a version of the song. Our cover version is posted at:
http://myspace.com/mallsecurityusa

Welcome Mall Security to the WIDE WORLD OF LOUIE!

3 thoughts on “Another NEW version of LOUIE LOUIE – Mall Security”