I owe a lot to my friend Jeff “Stretch” Riedle. If it weren’t for him, I would have never gotten into this LOUIE LOUIE mess.

Stretch was the guy who started the big MAXIMUM: LOUIE LOUIE marathon at KFJC. Until this event happened, I had no idea who Richard Berry was, what was going in the Pacific Northwest during the 60’s, or all this crazy nonsense about an FBI investigation of a simple little 3-chord ditty. To say that my life changed after this event would be something of an understatement. 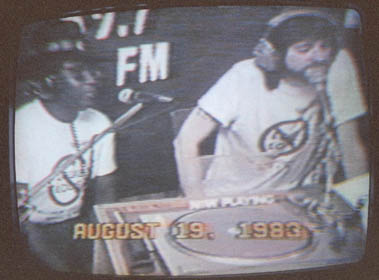 Right now, Stretch is dealing with something of a personal emergency. He needs to have an operation for a hernia, and he has absolutely no health insurance. After losing money on a record store, going bankrupt, and now working for minimal money, doing retail at a music store, he’s struggling to stay afloat.

Stretch has always been there for me, and he continues his ongoing goal to assemble the world’s largest collection of LOUIE LOUIE recordings. Yes, there’s more than one reason he’s gone bankrupt. It’s not easy being a visionary…. or fanatic… or whatever he is.

Stretch is my friend, and I’m going to do what I can to help him out. I’ve decided to put up a few choice items up on eBay to raise money for his operation. I’ve told a handful of friends about my plans for an auction, and almost immediately, I had some offers for items that I could sell for this very worthy cause.

I wanted to sell a bunch of items begining on August 19th, which is the anniversary of the legendary KFJC Maximum LOUIE LOUIE benefit, and the day of the big LOUIE FEST up in the Tacoma area. Unfortunately, I’ve been absolutely swamped by other tasks, including what’s been a full-time job of transferring every single video I’ve ever shot for the LOUIE project to the digital domain. I’ve also got a big job shooting video on Saturday, then flying off to Las Vegas on Sunday for a 3 day job. Before I do this auction, I wanted to do proper promotion, but I’ve been extremely busy…

I’ve decided to put up a few items up on eBay in time for the anniversary on August 19, and then put another batch of items up for bid one week later…. probably around August 26th…. assuming I don’t get distracted by last minute assignments.

Here’s some of the items that are planned for the big Stretch benefit auction:

– An LOUIE LOUIE wine cooler flat, autographed by the late Richard Berry, author of this fine song
– A special Kingsmen care package, featuring the new book by drummer Dick Peterson, a 35th Anniversary T-shirt, and rare LOUIE LOUIE guitar picks
– A rare “boxing style” poster (circa 1964) from Jack Ely, original Kingsmen vocalist, featuring the “other” Kingsmen
– Autographed CDs from Davie Allan (of the Arrows)
– An original sealed Flamin’ Groovies “Flamingo” album on Kama Sutra, courtesy of Tom Sagehorn
– A special LOUIE LOUIE sweatshirt from Richard Berry‘s collection, courtesy of Richard’s family
– An Eddie Rocco photography book, published by Norton Records, featuring some of the coolest rock and roll photography you’ll ever see..
– A Joe Louis Walker musical DVD, courtesy of Blues Express
– and how about this…. A CHANCE TO BE A MEMBER OF THE KINGSMEN FOR ONE DAY?
– and probably some other items I can’t remember right now…

That’s the tentative list for now. To see what I’m selling right now, CLICK THIS LINK FOR MY EBAY AUCTION.

You can also send a personal note to Stretch, or make a direct Paypal donation. Just drop an email to stretch-at-cruzio.com

(this Paypal button doesn’t work yet… but it will soon…)

You can also send snail mail to:

1 thought on “This One’s for Stretch!”