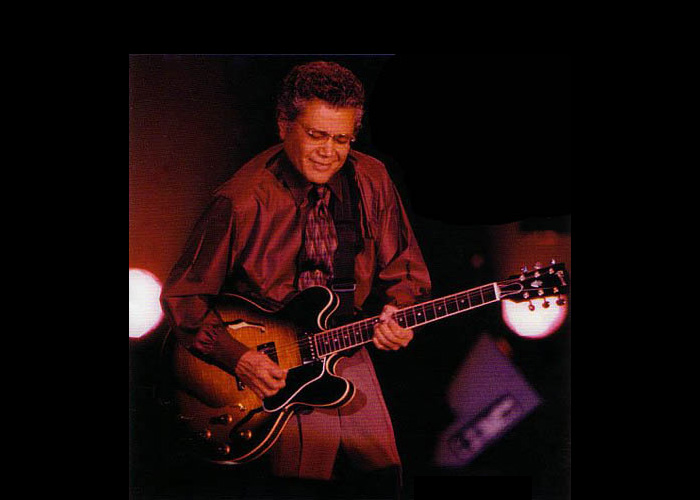 Imagine being part of one of the first rock ‘n’ roll / rhythm ‘n’ blues bands in your county….. back when this kind of music was often marginalized by the general public, or or at least by the newspapers.

In 1955, the Rhythm Rockers were such a band in Orange County, California.

This month, we’re mourning the recent passing of Barry Rillera, a founding member of that band, who had a very colorful career in the music industry.

The Rhythm Rockers was formed by Rick and Barry Rillera, two brothers that fell in love with the type of rhythm ‘n’ blues music that they heard on DJ Hunter Hancock‘s radio show. As Rick explained to Jim Washburn in 1991, “Those records of black music were really our influences for playing …The goal for us, the ultimate, was to play that music and be accepted by black musicians. And it turned out after we got rolling with the group, we played in black clubs in Watts for years and the musicians accepted us.”

The Rillera brothers became friends with singer-songwriter Richard Berry, who at that time, was a recording artist signed with Modern Records. They hired him to be a guest singer at their weekly shows at the Harmony Park Ballroom in Anaheim.

It was at one of those shows that Richard Berry was inspired to write the song LOUIE LOUIE. He had heard the Rhythm Rockers perform a Rene Touzet song entitled “El Loco Cha Cha,” which contained a little 3-chord hook that Richard thought could be expanded as the core melody of a brand new standalone song.

Richard wrote the new song, and waited until his record contract with Modern Records was over before recording LOUIE LOUIE with the Pharaohs and releasing as a B-side of a single for Flip Records in 1957.

The Rillera Brothers, joined by their brother Butch, continued as the Rhythm Rockers before transitioning into other groups. Rick, the oldest brother, and founder of the Rhythm Rockers, played bass. Barry played guitar, and sometimes saxophone, while Butch, the youngest brother played drums.

The brothers also worked with Dick Dale as members of his Del-Tones band, which were also regulars at the Harmony Park Ballroom.

Around 1960, the Rilleras were hired by Disneyland to become members of the Spacemen, a house band that was the first group to perform rock ‘n’ roll at the theme park.

Jim Washburn shared some history about the Rillera brothers in a 1991 article for Los Angeles Times:

Between the three working summers at Disneyland and weekends with Dick Dale, Barry put himself through college, gaining a teaching credential from Long Beach State College (now Cal State Long Beach). He taught for a year, then got a call to tour with the Righteous Brothers. He had met Bill Medley when both were in junior high school, brought together by common musical interests. The tall, deep-voiced Righteous Brother had received some of his earliest singing experience sitting in with the Rilleras’ band. In turn, the Rilleras played on all of the Righteous Brothers’ early recordings, and on some after they signed with Phil Spector.

Barry’s first tour with the Righteous Brothers was as the opening act for the Beatles first tour of America in 1964, which was something of a shock for everyone involved.

You can read more about that particular tour and the story of Paul McCartney asking Barry to talk to George Harrison about guitar techniques by clicking here or here.

Barry had a 30+ year career with the Righteous Brothers with a one year leave of absence to tour with Ray Charles. Barry returned to play with his friends Bill Medley and Bobby Hatfield for many more years, often wearing different hats as lead guitarist, bandleader and tour manager before retiring.

In the early 1990s, the brothers reunited a few times as the Rillera Brothers Blues Band.

In the last decade, Barry focused on his own music. He assembled a group of friends to play for the fun of it and recorded his first solo album entitled “From Where I Stand.”

My prayers go out to his family and friends.