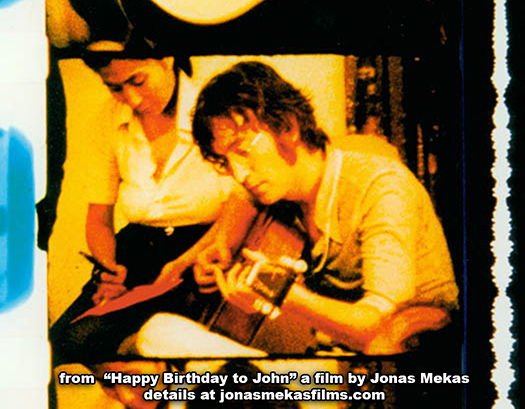 Today would have been John Lennon‘s 72nd birthday.

Forty-one years ago, there was a little party for him in Syracuse, New York, right after an art show at the Everson Art Museum entitled “This Is Not Here,” created by his wife Yoko Ono.

Immediately after the art show, John and a bunch of his friends wound up in a nearby hotel room to celebrate John’s 31st birthday party. Yoko ordered a cake for her husband, decorated with the words: “To John from Yoko and the whole world”. Some of the attendees at this party included Ringo Starr, Maureen Starkey, Phil Spector, Klaus Voormann, Mal Evans, Neil Aspinall, Eric Clapton, Allen Ginsberg, Jim Keltner, and Phil Ochs. Luckily some of the musical bits from this party were recorded for posterity on audio tape.

Among the songs sang by John at his birthday party was a snippet of “LOUIE LOUIE,” sandwiched between “Like A Rolling Stone,” “Twist And Shout” and “La Bamba.” Luckily, the un-official recordings of this party were released into the trader’s circles, allowing the public to share in the fun. Over the years, there have been a handful of different John Lennon bootleg records and CDs featuring audio from this extremely rare birthday performance.

With the advent of YouTube and other file sharing services, now more folks than ever can enjoy this fun music without having to pay outrageous prices for rare archival recordings.

To celebrate John’s birthday today, his version of LOUIE has been declared LOUIE of the Week!

Cue up this YouTube clip to the 2:07 mark, and you’ll be able to hear one of the rarest versions of LOUIE LOUIE never officially released.

Filmmaker Jonas Mekas captured some moments of John’s 31st birthday party with his film camera, and his website mentions the 18 minute film he created from footage entitled “Happy Birthday to John.” This film, which was released in 1995, not only used footage from the party, but it also featured clips from the 1972 Madison Square Garden concert, and the 1980 Vigil in Central Park following John’s tragic demise.

There were a handful of interesting things that happened at this party. The BeatlesBible.com website pointed out that John composed a new song in the hotel room that night before the party started….

Before the guests arrived, however, Lennon began composing “Attica State,” which would later appear on the “Some Time In New York City” album. “It was conceived on my birthday,” he later explained. “We ad libbed it, then we finished it off.”

Thanks to the power of the internet, we are able to read about Mark Mahal, who at the age of 14 years old, attempted to attempt to crash this particular party, and wound up with a piece of John’s birthday cake, which is still in his freezer.

Most tantalizing is John’s decision to play both “Yesterday,” a Beatles song associated with Paul McCartney, and “Uncle Albert/Admiral Halsey” a song written by McCartney after the band split up. It leaves you wondering if John had some inkling of what prominent arts administrator David Ross says in (that particular day’s) column was a failed dream of overcoming bad blood to reunite The Beatles in Syracuse.

For those of use that loved John, we are often haunted by the sadness of such a failed dream and the ongoing fantasies of the various “What If’” scenarios that will never really go away …
… but in the meantime, here’s John’s performance of “Uncle Albert/Admiral Halsey” mixed in with the “Happy Birthday” song.

Happy Birthday John, where ever you are…..