I took some photographs of myself in my home office, wearing two sets of 3D glasses, all wrapped up with Firewire and ethernet cable. By some odd coincidence, I wound photographing myself with a lightbulb right next to my head, which made it look like I some kind of moment of brilliance. Before I decided to submit it to the special WIRED magazine promotional website, I showed this photo to my niece Deanna, who thought that I needed to be posing with Bubba, the crazy dog I live with. After all, magazine covers with dogs always seemed to be a successful combination, right?

So I had another set of photographs taken, this time wearing just one set of 3D glasses over my regular eyeglasses, some loose ethernet cables around my neck like some geeky necklace, positioned in the backyard near some old car batteries that were part of the continual house recharging project. This time, Bubba, my four-legged spiritual advisor was part of the picture. As it turned out, these pictures did turn out better than the original concept without the dog. Once again, Bubba saves the day!

So I log into the Special Wired.com/promo/xerox website to submit my portrait as one of the loyal subscribers willing to go along with this little diversion. As luck would have it, I was too late to be one of the first 5,000 people to receive a special personalized copy of WIRED magazine with my photo on it. Even though I received this magazine just a few days ago, 5,000 other people beat me to the punch! OUCH!

Fortunately, this special WIRED promo website allows folks to create their own WIRED magazine cover just for fun. In retrospect, it would have been simpler to create my own damned cover in Photoshop, but I went along with this little diversion anyways….

So, if I was on the cover of WIRED magazine, this is what it would have looked like: 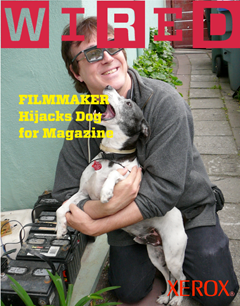 NEXT: Information about the upcoming INTERNATIONAL LOUIE LOUIE DAY!