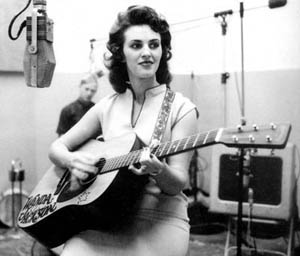 I recently did a little video test with a small consumer still camera. I’d been reading about a versatile little Panasonic- Leica Lumix TZ1 camera over at Kevin Kelly’s Cool Tools webpage, so I decided to pick up one of these little units to replace my tired old Nikon digicam.

Rockabilly legend Wanda Jackson did a show last weekend in Felton last week, backed by my favorite local country band, Red Meat, so I decided I’d do a test to see how well this little camera would work in a concert environment. Here’s a performance of the song “Mean Mean Man,” shared with you for free on America’s favorite new TV channel- YouTube.

Overall, I was very impressed with the quality of this little pocket camera. The audio is so-so, but the picture quality is pretty good, considering the club lighting. It blows me away that I can shoot 20 minutes worth of decent video (640 x 680- 4:3 , or 848 x 480 – 16:9 widescreen at 30fps Quicktime) on a 2 GB SD card that’s about the same size of a postage stamp. The 10x Leica optical lens is not too shabby either. It’s a nice little travel companion to carry around without too much hassle.

Wanda Jackson, by the way, was excellent, as always. I’ve seen her perform five, maybe six times, and she always delivers a great show.

Some of you may be asking, “What connection, if any, does Wanda Jackson have to the LOUIE LOUIE universe?” Back in 1954, Richard Berry, author of LOUIE LOUIE, was the anonymous lead singer with the Robins for one of their earliest hits- “Riot in Cell Block #9” written by Jerry Leiber & Mike Stoller. Seven years later, Wanda recorded “Riot In Cell Block #9,” and it became a hit once again.

Like Elvis Costello, I believe that Wanda Jackson should be a member of the Rock and Roll Hall of Fame. I also think that this particular organization should admit Richard Berry, Screamin’ Jay Hawkins, the Wailers, the Flairs, the Kingsmen, Paul Revere & the Raiders, the Sonics, Moby Grape, Quicksilver Messenger Service, Cheap Trick, Dave Clark Five and the Monkees.

Of course, this is just one man’s opinon. If this is something you can agree with, then feel free to pester the folks at the Rock and Roll Hall of Fame!