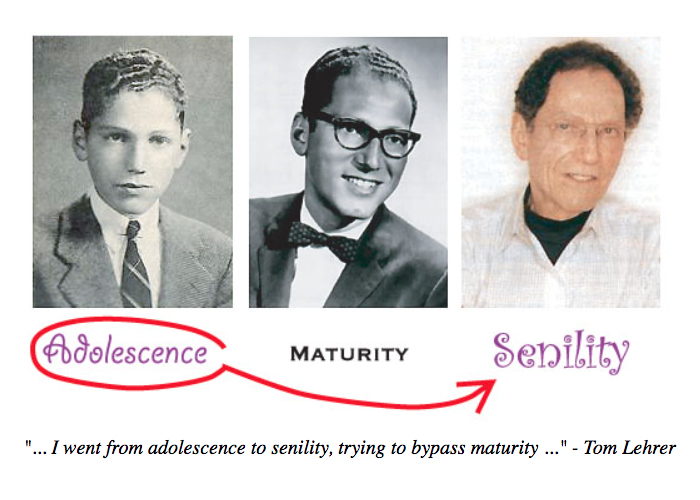 Tom Lehrer, the brilliant singer-songwriter, satirist, and mathematician, has provided a great gift for all of us that love cutting edge musical parody.

In 2020, at the age of 92, Lehrer donated all of his lyrics and music written by him to the public domain. He recently followed up on all of this by announcing on November 1, 2022 on his official tomlehrersongs.com website, that he is giving away all of his recording and performance rights, making all of his music that he has originally composed or performed free for anyone to use and available directly from his site for free download. His statement releasing all his works into the public domain concludes with this note: “This website will be shut down at some date in the not too distant future, so if you want to download anything, don’t wait too long.”

“WOW!” … I say! Has any other prominent internationally acclaimed musical recording artist ever done this sort of thing before? I can’t think of any…

If you haven’t read the Wikipedia entry on Tom Lehrer, it’s absolutely worth checking out. He was, and is, a fascinating creative individual with quite a legacy.

In author and Boston University professor Isaac Asimov’s second autobiographical volume, In Joy Still Felt, Asimov recounted seeing Lehrer perform in a Boston nightclub on October 9, 1954. Lehrer sang a song about Jim getting it from Louise, and Sally from Jim, “…and after a while you gathered the ‘it’ was venereal disease. [The song was likely “I Got It From Agnes”.] Suddenly, as the combinations grew more grotesque, you realized he was satirizing every known perversion without using a single naughty phrase. It was clearly unsingable outside a nightclub.” Asimov also recalled a song that dealt with the Boston subway system, making use of the stations leading into town from Harvard, observing that the local subject-matter rendered the song useless for general distribution. Lehrer subsequently granted Asimov permission to print the lyrics to the subway song in his book. “I haven’t gone to nightclubs often,” said Asimov, “but of all the times I have gone, it was on this occasion that I had by far the best time.”

In 2013, Lehrer recalled the studio session for “Poisoning Pigeons in the Park”, which referred to the practice of controlling pigeons in Boston with strychnine-treated corn:

The copyist arrived at the last minute with the parts and passed them out to the band… And there was no title on it, and there was no lyrics. And so they ran through it, “What a pleasant little waltz”…. And the engineer said, “‘Poisoning Pigeons in the Park,’ take one,” and the piano player said, “What?” and literally fell off the stool.

As Mr. Lehrer mentioned that his website will be “shut down at some date in the not too distant future,” I took a look at the WHOIS details of his domain, and noticed that his GoDaddy registration for this page may expire on May 12, 2023.

Can some inspired soul please renew this registration and web hosting indefinitely?

Or .. Can some inspired soul(s) please download all of the Lehrer files and assemble new Tom Lehrer webpages to celebrate and preserve this amazing legacy?

I wish I had more hours in the day and better webpage tech skills, but what else is new? Hopefully someone will step up and make such things happen…

Anyways, thank you Tom Lehrer for all of your wonderfully entertaining music, and your generous donation to the public domain!

P.S. Some of you may be asking…. what kind of connection would the music of Tom Lehrer have with LOUIE LOUIE?

2) Both varieties of music were re-issued with heartfelt compilations by the original Rhino Records music label (pre-Warners).

3) Both varieties of music have an unlikely connection to Santa Cruz, California.